skip to main | skip to sidebar

Influence is sometimes obvious, sometimes more subtle. For example: the Beatles openly demonstrated how much they respected their American rock'n'roll heroes by filling their early stage shows, BBC radio performances and records (from 'Twist And Shout' to 'Bad Boy') with their songs. Bob Dylan was an equally important influence on their work from 1964 onwards, yet they never covered any of his songs (George Harrison's endless introduction of Dylan tunes into the 1969 Let It Be sessions aside, of course). Dylan's inspiration is reflected in the way that the Beatles' songwriting changed between 1964 and 1965, and in their subsequent willingness to escape from the I-love-you, she-loves-me school of composing. (On another occasion I'll tell you about George's home demo of Dylan's song 'Every Grain Of Sand', cut alongside several takes of the Everly Brothers' 'Let It Be Me'.)

Several months back, I mentioned that I'd had to abandon this blog because I was writing a book about David Bowie & the 1970s. It's called The Man Who Sold The World, and it is out in the UK now (and available from Amazon here; US publication follows next year). In this interview, I talk about the way that the book grew out of the project that Ian MacDonald of Revolution In The Head fame was contracted to tackle at the time of his death.

As I've said before in this blog, I was struck during the research of the Bowie book by the influence that the Beatles had on Bowie's work in the 70s. Some of that influence is obvious - the McCartney-inspired piano styling of 'Oh! You Pretty Things', for example. As early as 1965, in an obscure song entitled 'That's Where My Heart Is', Bowie sounded as if he was learning how to write songs by listening to With The Beatles. Other musical links between Bowie and the Beatles were more surprising: in the book I talk about the apparent Fab Four influence on 'Blackout' from the 'Heroes' LP. In more recent times, of course, Bowie actually covered George Harrison's 'Try Some, Buy Some', claiming that he hadn't realised that George had written the song.

But the single most dramatic role played by the Beatles in Bowie's 70s work was exerted by John Lennon's Plastic Ono Band album. You can hear a touch of Lennon in the way Bowie sings 'Space Oddity' in 1969; some Beatles-inspired backing vocals on 'Star' from the Ziggy Stardust album; and, of course, yer actual Lennon voice and guitar on Bowie's cover of 'Across The Universe' and his hit single 'Fame'. For the full Plastic Ono Band effect, however, listen to this:


The acoustic opening section is orthodox enough. Where the track gets interesting for Beatles fans is about 50 seconds in, when Bowie is suddenly supported by exactly the same blend of piano, bass and drums that pushes Lennon through songs like 'Mother' on Plastic Ono Band. There's even a solitary bass drum exposed before the instrumental solo, borrowed from Lennon's 'Isolation'.

All of which made me wish that Bowie had made a whole album (1980's Scary Monsters, perhaps) in similar vein. So I was intrigued to learn from Bowie fan Martyn Mitchell that guitarist Adrian Belew recalled working on a whole set of Plastic Ono Band-inspired tracks with Bowie around this period, but that Bowie never completed or issued them. Perhaps he was hoping that he might persuade Lennon himself to join him in the studio - until fate, and a madman, intervened.
Posted by Peter Doggett at 11:57 8 comments:

Somebody e-mailed me this week to ask about my new book on the Beatles: Come Together. "I haven't written a book called Come Together", I replied. "Yes, you have," they mailed me back, "and you can order it on Amazon".

So I checked - and they were right. It was time for Google to kick into action, and it was with the help of the world-spanning search engine that I discovered that I had indeed written a book called Come Together - or, to be 100% accurate, Come Together... 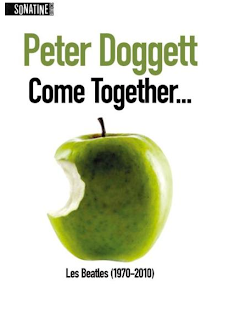 It turns out that Come Together... is the title of the French translation of You Never Give Me Your Money, published by Sonatine in Paris on October 20. (You'll see that the book is subtitled Les Beatles (1970-2010), which is sort of what You Never Give Me Your Money is about, but not exactly.) At first, when I just saw Come Together as the title, I was mystified. Isn't the whole book about the fact that the Beatles couldn't come together? But then I saw those extra dots at the end of the title, and realised that the title meant Come Together - Or Maybe Not.

Anyway, I'm looking forward to reading it. The translator seems to be extremely experienced, and I love the French cover design, too. (It brought back memories for me of the Apple logo on George Harrison's Extra Texture album.) So I'll proudly admit to being the author of Come Together... but only if those three dots are there.
Posted by Peter Doggett at 08:10 3 comments:

If you ever have a spare week of your life to lose, you can track the fall-out from 1969's 'Paul is Dead!' conspiracy theory across the internet. There's a particularly entertaining (and apparently endless) series of Youtube videos proving that Mr McCartney was killed in that 1966 car crash, and replaced by a not-quite-near-enough lookalike.

Elsewhere on the net, you'll find massive websites devoted to 'Faul', the fake Paul, and his adventures since 1966. When it comes to conspiracy theories, I'd rather start with something more serious. I've wasted plenty of time since the early 70s trailing through volumes devoted to the JFK assassination, and long ago I decided that the journey was more fun than finding out who actually did it. No answer to the mystery could ever be satisfying enough to make all that reading worthwhile, so it was better not to know.

Back to the point. About twenty years ago, I discovered that issue 222 of Batman comic was devoted to a twist on the 'Paul is Dead!' tale, presumably in a desperate attempt to make Bat'n'Robin seem vaguely hip. (Instead of which, Dick Grayson and his 1970 college chums look as if they've stepped out of a 1962 Frankie Avalon beach movie.) The cover is enticing, and ever since then I've been distantly keen to read the whole comic - preferably without paying $40 for a copy.